Travel: Adventure on the Goldstream Trestle in Victoria BC

While in Victoria, BC last week, we went on a hike that turned out to be more of an adventure than we had planned. It made me re-visit my heart that is attached to Ken and Michael, more so than I had ever felt it before.

This was the day Ken that had been looking forward to, for quite a while now. He was VERY excited to use his brand new drone, since we left Burlington the week before. He bought it to take some adventure footage travelling through Vancouver Island while we were here for two weeks.

Erinn, Mike, Ken and I went out to do the beautiful Goldstream Trestle hike and, of course, Ken wanted to drone it from sitting on the trestle (of a height of 300’ over the tree tops). The scenery was spectacular. The view was epic. The 300′ height of the trestle over the valley (Goldstream Provincial Park) provided a vista of trees, and rocks and birds – you could see for miles. Then, you guessed it! Of course the drone went haywire and Ken lost control of it somehow and the drone ENDED UP IN THE TREES below.

And of course, ….Michael and Ken went to rescue it (yes – boys!)

(Below you can see Ken in the blue sitting on the edge of the Goldstream trestle and there is a 300′ drop below. All is still good at this point) 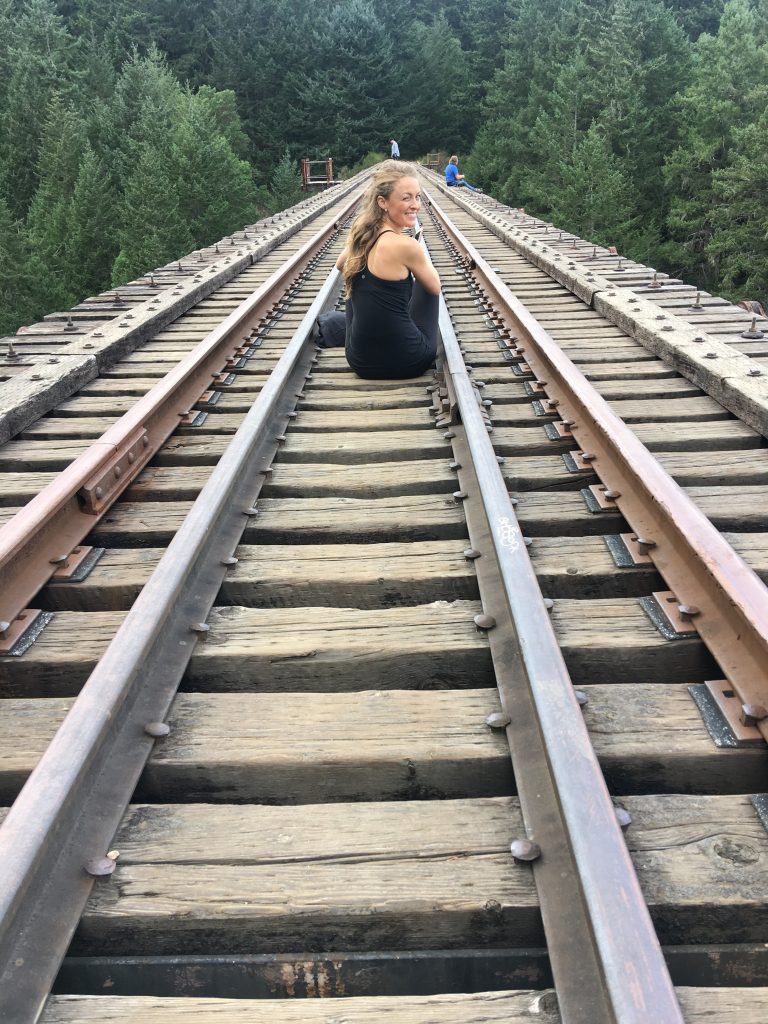 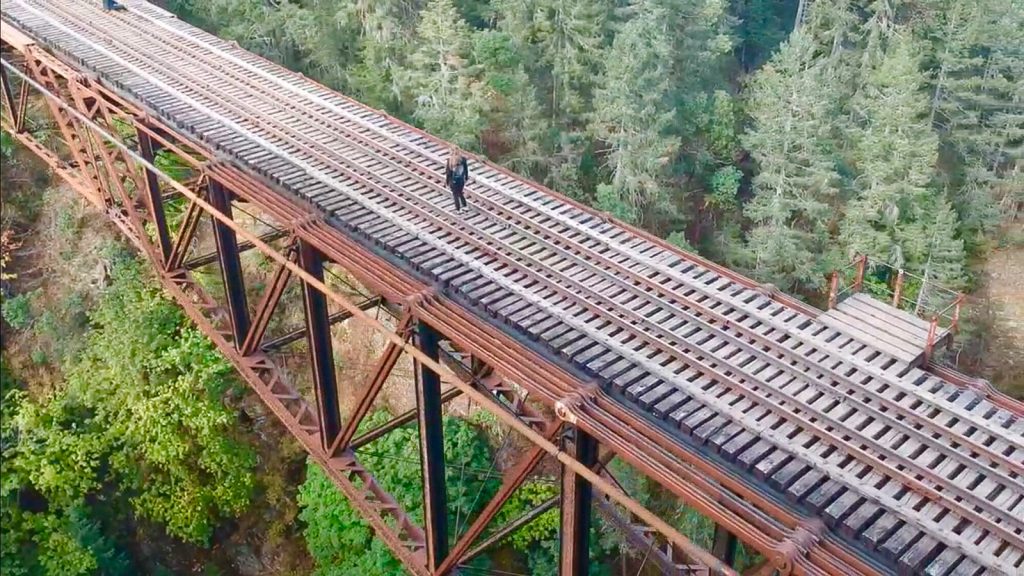 I knew it would take a while and knowing Ken for all of these years, I trusted he would be resilient and resourceful enough to accomplish what he set out to do. I asked for the car keys before they left us (smart for me – lol) to go on their trek to the drone. It was getting colder and quite damp with the misty air and there was no way I was hanging around at the top. Dusk was upon us as well and I needed my gloves.

Erinn and I headed down.

It went from cold to bad to worse very quickly and as Erinn and I made our way down the very steep incline of the path on the hike, I realized it would be no easy feat finding your way through the wilderness on a vertical descent ….without a path. Ken and Michael were ‘off the path’, in the thick of the woods, cliffs, vine and rock. 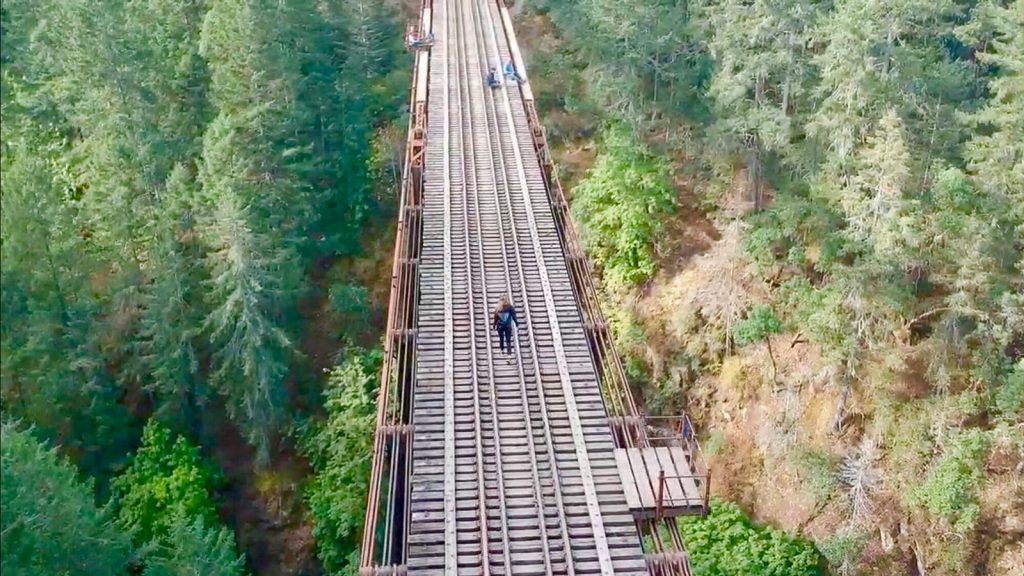 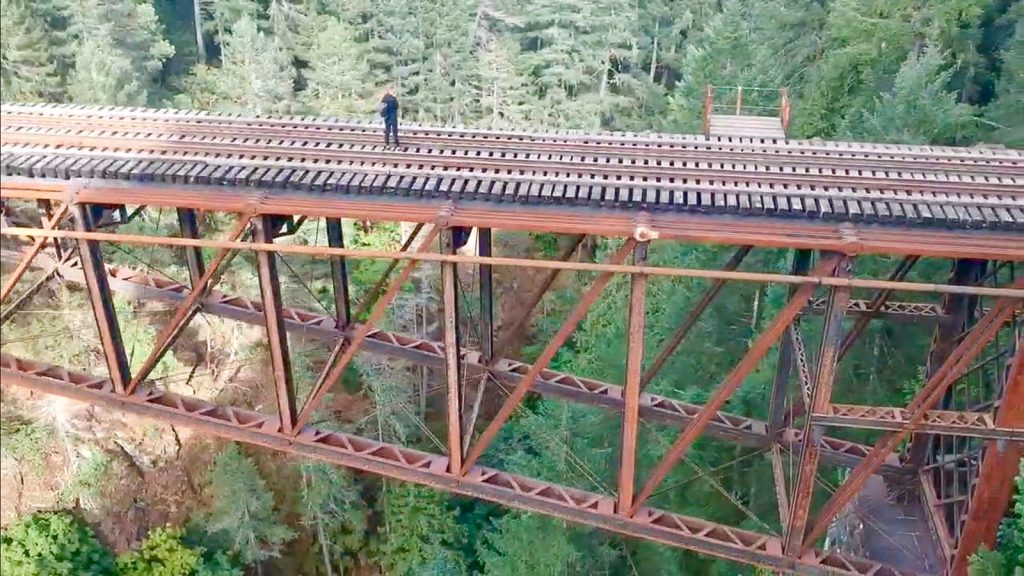 Erinn and I made it down the path in about 40 minutes or so. I thought that was plenty of time for the boys to figure out if they could find the drone or not and let us know they are on their way down. Ken called me then and his tone had changed immediately into one I had never heard. “Kelly – we are stuck, we can’t get down, you need to call 911. It’s bad here and I have 6% on my phone”. I paused in complete confusion not thinking this could ever happen and to be honest, I thought he was fibbing and was trying to freak me out like he has done a few times before.

WHAT??! Is he telling the truth? Really? He confirmed, “Kelly – I’m telling you the truth. It’s bad”– and I could now hear it in his voice and feared the worst in his tone. I felt like a train hit me. How were they stuck? It was getting dark and the rain mist had started. It was cold. Ken had no coat on. Mike had only (stupid) running shoes. It was very steep with slippery, mossy rock edges that had 50’ to 100’ drops. Erinn and I had no way to reach them. I tried to find their GPS location and I couldn’t find them. I started to get that instant sickly feeling in the pit of my stomach.

Erinn took my cell phone out of my hand (as I kind of started getting very panicked and upset with Ken – I was very worried about Mike being in our care too of course and the momma bear kicked in). Erinn was texting and called Mike and her words she used with them was, “slow and steady wins the race” and this is exactly what they were doing…making their way down….ever so slowly.

It’s mind-blowing how a bad situation can become so much worse in seconds by not being prepared in Mother Nature. She has a mind of her own and we were the very silly ones not prepared for the “what-ifs” that can happen, in the wilderness, of Mother Nature.

I’ll spare you the details of what transpired over the next hour or so, but they did finally emerge. A little battered and bruised with dirt all over their faces, a couple a tears to the trousers, filthy bodies, scrapes on their arms and legs and a sprained finger too…. and without the drone….of course.

(below: They seem excited to have this adventure over!) 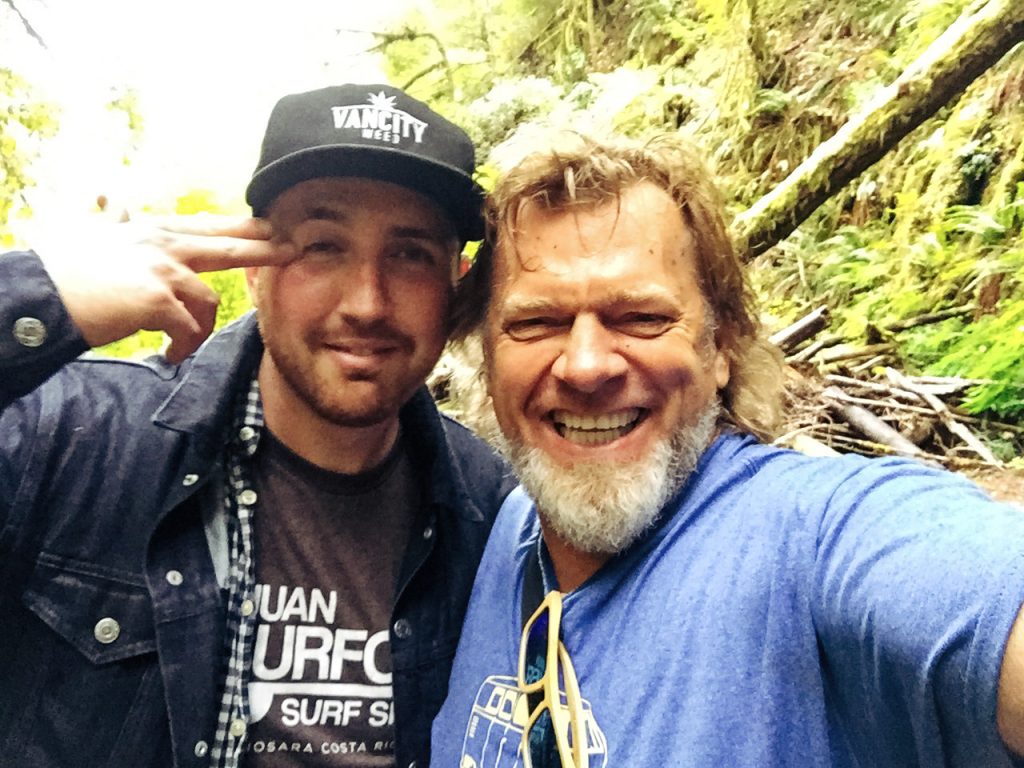 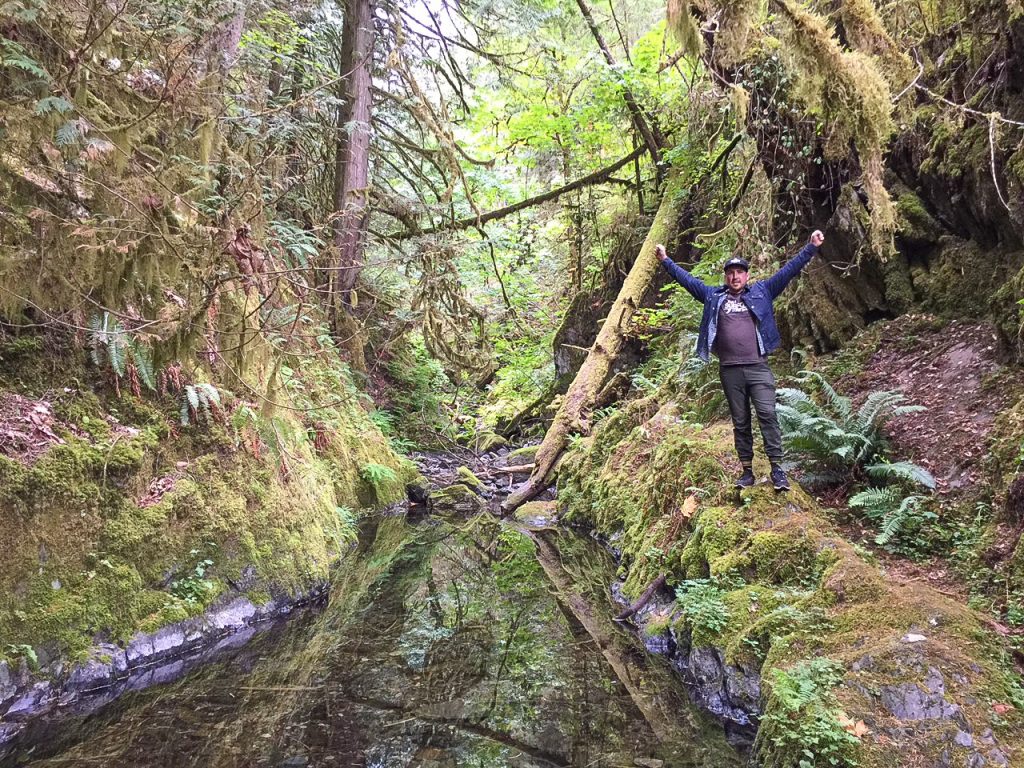 I was pretty choked up and of course, did not want them to see that! I was frozen to the bone and ecstatic we could make it to the car and finally get warm and make our way home. Relief was an understatement and yes, totally upset with them at the same time (to be honest – ready to clobber them both). 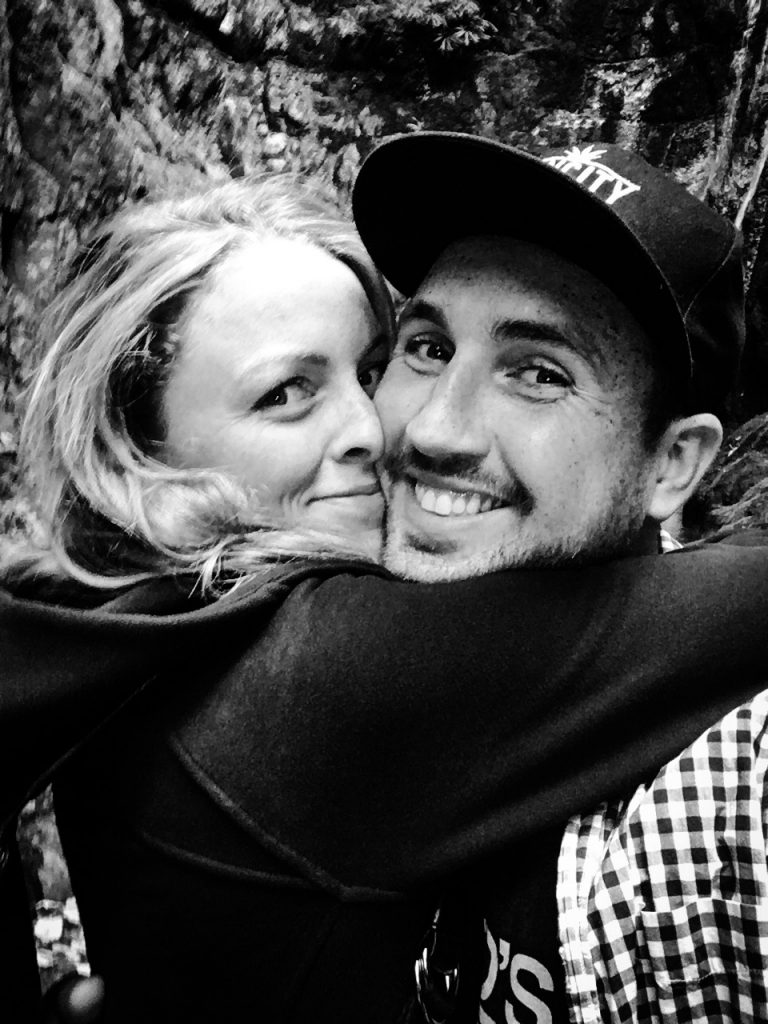 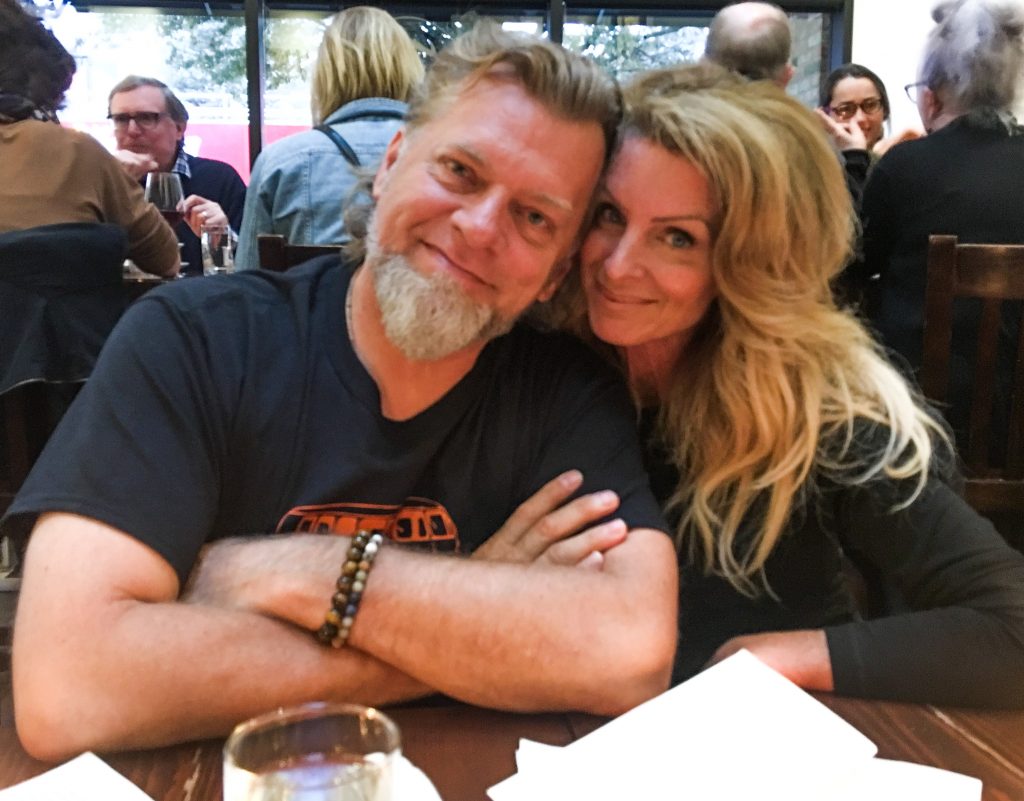 That night we celebrated my birthday and grateful that the 4 of us were together in beautiful BC. What a birthday adventure to remember….XO

Bring this burger to your next BBQ party.

To get there; we must confront every negative story we tell ourselves about ‘our world’.

The green way to start your day.

The comfort meal for everyone that leaves you feeling light, not heavy.

1 thought on “Adventure at the Goldstream Trestle – Victoria, BC”